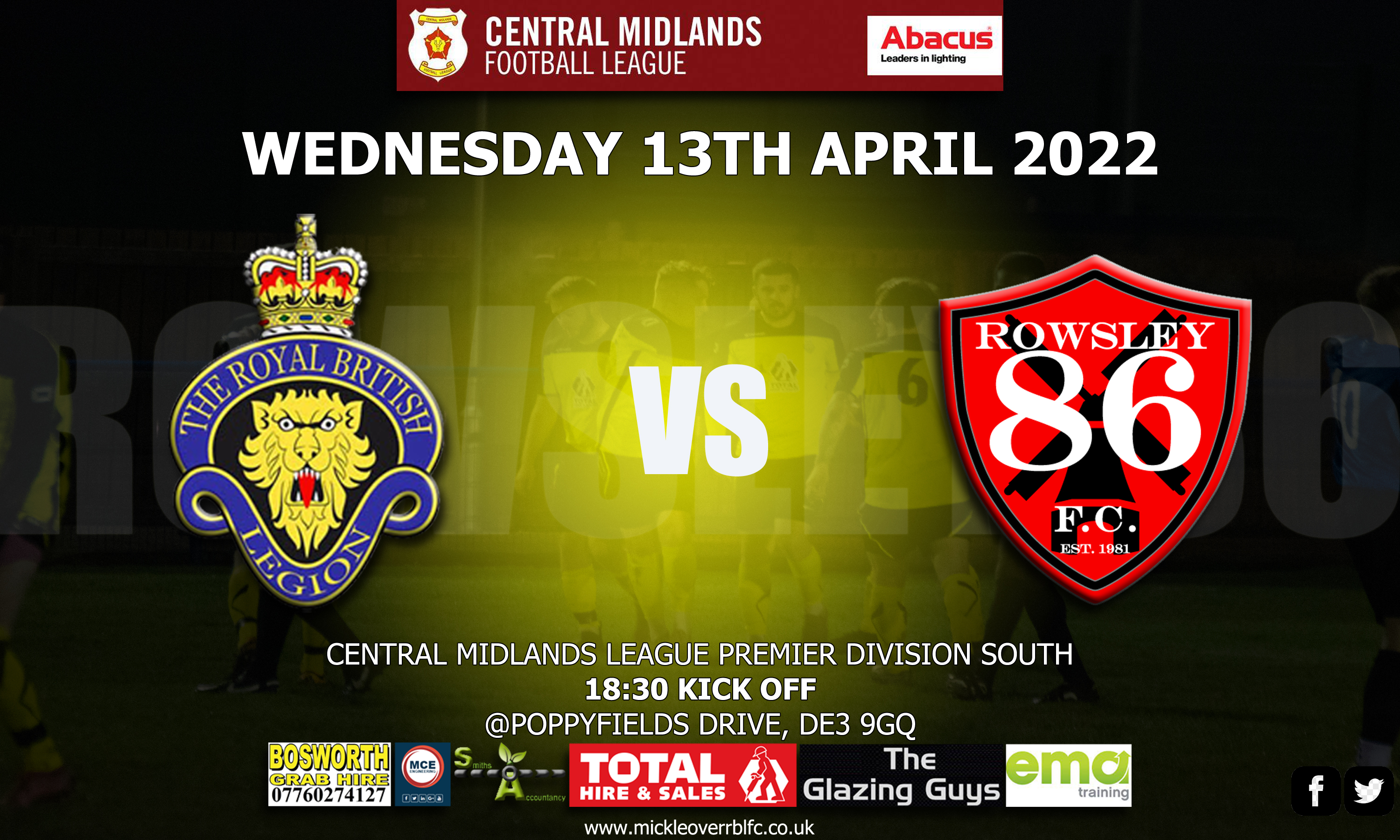 A REVERSE OF SATURDAY'S FIXTURE

Next up, it’s a first home midweek match in an April run, which will see the Lions playing a total of ten matches in twenty nine days. Both teams on Wednesday night will have a pretty good idea about each other as they met just five days before as RBL came out on top against Rowsley 86.

The match at the weekend saw RBL travel past Matlock to the village of Rowsley, where they faced mid-table Rowsley 86. RBL could count themselves lucky after sneaking a 3-2 victory over a Rowsley side who would have hoped for more after they dominated the play for larger spells of the game. Goals from Lee Hillier, Dean Oliver and Josh Wright were enough to take all three points while Rowsley could only hit back through Nick Bainbridge and Conor Hiley.

RBL’s last match saw them take a midweek trip to Teversal, where they faced bottom of the league Teversal Reserves for the third time this season. This time, however, was a completely different kettle of fish. Teversal Reserves was actually the Teversal first team. A stunning RBL performance saw a 35 yard rocket from Owen Brader and a customary Jordan Lee goal give RBL a third victory over a team from Teversal this season.

The visitors, Rowsley 86 head into this match on a run of two wins out of six after Saturdays’ result, which sees them sitting in mid-table in ninth spot although Sherwood Colliery Reserves in tenth have a couple of games in hand. Their last away match saw them slip to a 2-1 defeat at Debdale Park at the hands of Sherwood Colliery Reserves, who are now breathing down their necks in tenth. A goal from Steven Mallinder wasn’t enough to get any points for Rowsley. We’ve already covered Rowsleys match at the weekend in their home defeat to RBL.

Saturdays match will not have provided any psychological advantage for the home side as they will need to perform much better if they are to repeat the victory and take three points. Rowsley will be spurred on by their own performance on Saturday and will be keen to “get even” and take the points away from Poppyfields Drive. RBL still have three games in hand on third spot and can go just two points behind third placed Pinxton. Rowsley, will want the points to cement their spot in mid table and build for next season and make up for their unlucky defeat at the weekend.

The last meeting was just five days before, as RBL took an undeserved three points at Rowsley in a 3-2 victory with goals from Lee Hillier, Dean Oliver and Josh Wright.

Before this season, the two sides last met in the Covid ravaged 2019-20 season in what was a rarity in that both fixtures were completed.

In the home match in September 2019, RBL could only score once in a crushing 7-1 home defeat.

RBL fared only slightly better in the away fixture, again, still scoring once, but conceding only five goals on this occasion for a 5-1 defeat.